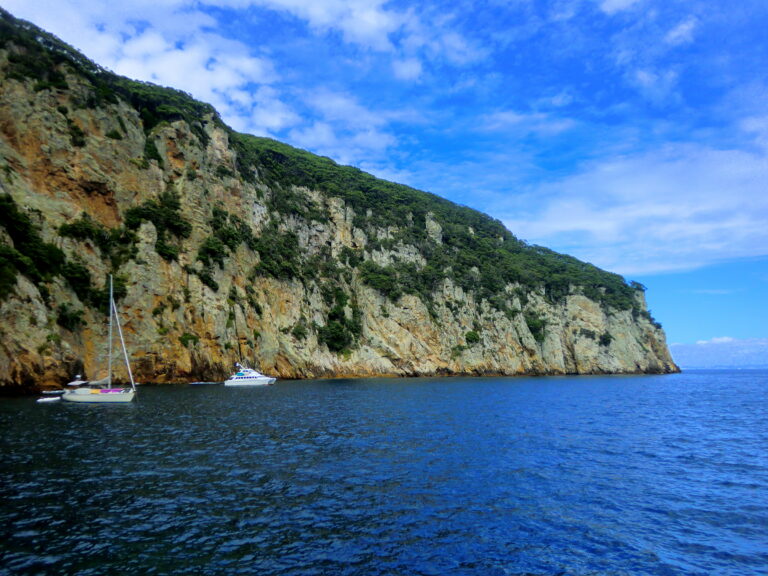 When I booked my trip to go to New Zealand, one of the first 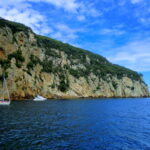 things I did was buy “The Rough Guide to New Zealand”. (I always buy Rough Guide, somehow I like those guides better than Lonely Planet or Capitol or whatever other options there are)

As I really enjoy diving and never do any diving in Europe, I’m always really excited about the prospect of being able to dive in some faraway land. So when I bought my travel guide, looking up possible dive sites had a high priority.

The dive location with the highest rating by far was the Poor Knights Islands. It was actually named as one of the top 10 dive sites in the world by Jacques Cousteau.. And he should know!

There are a few more major dive sites in the area, but when you hear such a recommendation from such a renowned traveler, there’s not really a lot left to consider. So ‘Poor Knights Islands’, here we come! 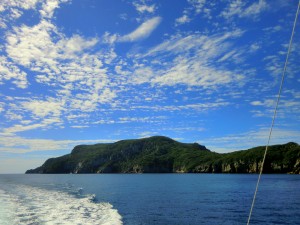 There are a few different outfits who offer trips to the Poor Knights Islands, and I really couldn’t tell you the difference between the lot. But I wasn’t staying in Tutukaka (the harbor town leading to the islands) but inland at Whangarei. That meant I needed a ride, and there was only 1 company that offered to come get me.

If you know me, you’ll know I’m terrible at making quick decisions, but this was a very easy one!

A guy sent by Dive Tutukaka! picked the lot of us up at my hostel and drove us to Tutukaka. I usually get seasick, but in this case I was already ill before we even reached the diving center. I definitely blame the driver! But that was nothing that a little cuddle with the local toilet couldn’t cure 🙂

A group of about 20 divers was ushered onto the diving boat, after a thorough check in. People who were qualified were given the option to dive without a guide, and those who wanted (or needed) a guide were all divided into groups based on their level of experience. It was well taken care of and the groups were nice and small. 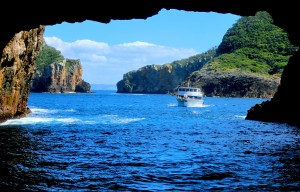 So we started off towards the open sea. At first the sun remained hidden and it was a bit cold, but when you have to jump into the water anyway, it shouldn’t really matter. So we went on our first dive. I sucked.. Not as bad as I did on my first dive in Australia (which you can read about here) but I wasn’t impressed with myself. I ran out of air after about 25 minutes, purely because I couldn’t control my breathing and kept struggling against the current.. Not impressed at all..

But hey, what do you do? Keep trying until you succeed (or die trying 🙂 )

But first, we got lunch! You had the option to bring your own, or have it catered by the dive center.. Well, let’s just say I could never have catered that myself. It was an amazing lunch! Excellent sandwich, fresh fruit, a chocolate bar and a big mug of English tea. Excellent! It really boosted my spirit, especially combined with the sun that decided to make an appearance. The area it absolutely gorgeous so even if you’d choose to remain above water the entire day, you’d enjoy yourself!

After lunch we sailed to another dive site. The groups were slightly altered because someone was getting an introduction dive. This time, we would be going into an underwater cave, and swim through some underwater holes. (Seriously, this part of New Zealand has its share of holes in rocks.. They keep pointing them out everywhere like it’s such a precious thing to witness.. but really, it’s just a hole in a rock.. some small, some big, but still just a hole.. You guys should be more worried about the fact that your rocks are apparently dissolving into nothing… just saying.. ) 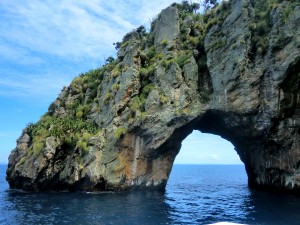 This time, my dive went a little better. My buddy commented afterwards that I seemed to be a lot calmer, but I still ran out of air after 30 minutes or so. This may also be due to the fact that I didn’t fit in the underwater cave and had to push my way through other divers to get a space between the rest of the group.. And diving through small holes underwater is pretty scary if you’ve never done it before.

All in all the dives were OK.. not great, but OK..

The location as well. This part of the sea mostly has kelp and weeds in its reef, in stead of coral which you would find in Australia for example. I don’t necessarily like kelp… big, annoying plants that you can get stuck in if you don’t watch yourself.. not a lot of different colors, and not a lot of big creatures. We saw 1 decent sized stingray, and the rest was just fish, fish and fish. 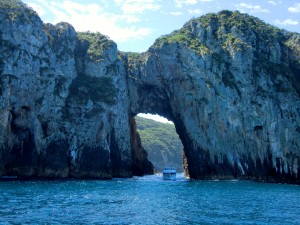 I had high expectations because of the Jacques Cousteau story, but was rather disappointed with what I found in the end. It was an OK dive site (and you will probably enjoy it a lot more if you haven’t been spoiled at Great Barrier Reef) but the qualification of ‘top 10 in the world’ was far off my experience. But then maybe we just went to different sites than Jacques did in his day, or maybe I would have loved it more if I’d had less of a struggle.