This week, one of these pages shocked me: 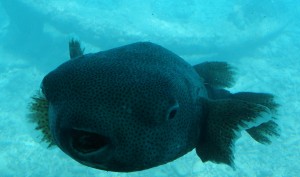 “Places to see before you die” shared a video of a puffer-fish kept in a bowl of water and pinched so it would blow itself up. I guess they thought that it would be funny to see.. Well HA-HA.. I’m not impressed.

Years ago I did my first diving course, and one of the first things that we learnt was to not touch any of the animals we encountered. It’s a simple idea called preservation: don’t disturb the place where you are a visitor, so it can remain in good health. This enables other people to be able to visit as well in the future.

As I said, a simple idea, right?

Apparently not. Apparently there are a lot of people nowadays that don’t care about preservation. They care about making a funny video and even maybe getting their minute of fame, at the expense of a fish.

Yes that’s true, it’s just a fish.. there are literally plenty of fish in the sea. But if you accept this, what will you do next time when it’s not a fish, but perhaps an endangered animal forced to do something that may cause their death ‘because it’s funny’?

Stop taking your hunger for fame out on animals. If you want to be famous by making a funny video, do something that’s actually funny, instead of abusing a helpless animal.

Also, if you’re a Facebook Page promoting travelling, what on earth are you doing sharing such a video? Is it really that important to you to keep up a steady flow of new posts, that you don’t even stop to think before you share?

I’m not an animal activist or a proud sponsor of Greenpeace or whatever, but I am a strong believer in human intelligence. If you’re not able to see that this is the wrong thing to do, then in my book, you’re not really all too bright!

Things to do in Vang Vieng during Laos New Year