Wow, that’s a weird title right? Floating with worms… Sounds like some third rate new talent show like dancing with the stars.. but nothing like that: something way cooler actually!

Have you ever heard of glowworms? Know what they are?

It’s all in a name: They’re worms that glow. Technically, they’re not really worms, and technically it’s not actually their body that’s glowing, but that’s not important. Once you see it, all technicalities are forgotten!

Glowworms exist in a lot of places in the world, but the caves of Waitomo are known worldwide for their enormous population of these little creatures, and also for their accessibility.

There are numerous caves in the area that are accessible in different ways.

As all of these caves are half filled with water, it’s not really a matter of just heading out and walking around. Some caves have boardwalks installed where you can get a view from afar, but for the genuine experience you’ll want to get closer.

There are a few options to do so: you can either jump in the water and swim, but it’s quite cold so it might spoil the moment for you. You can also inflate a rubber tube and float along, chilling out and looking up to the beauty above while you’re at it. There’s a third option for the thrill-seekers among us: combine tubing with caving. You’ll have to climb over stuff, jump off other stuff and put some effort in, but then you’ll also get to see the worms.

(By the way: they tend to call all these activities black water rafting, but as there are no rafts involved, I’d say the name is pretty misleading)

It’s a matter of taste and a matter of money to choose which option you want to take. I like my thrills, but I don’t necessarily do well in narrow dark caves, and it was pretty expensive, so I decided to just float on by. I loved it!! 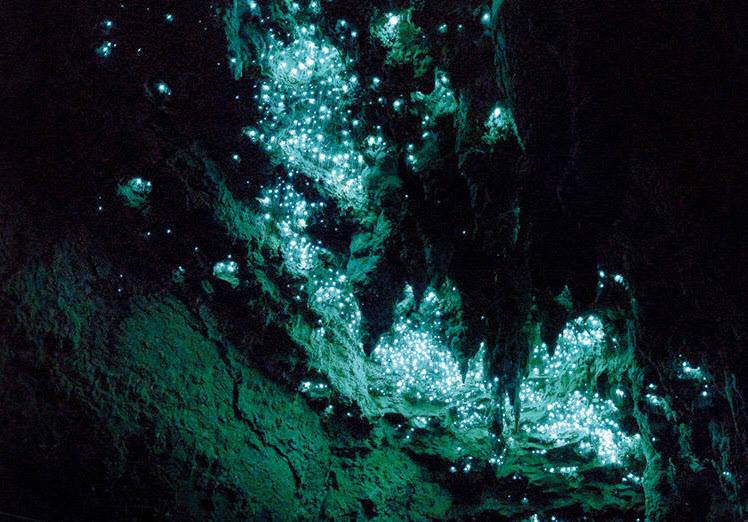 At first I was a bit anxious.. not because we had to let ourselves fall backwards 3 meters into the water trying to land on the tube on our bum.. no, that was easy.. I was anxious because my tube was a bit too small, so I couldn’t sit up properly and therefore couldn’t really steer my ‘vessel’ either. I don’t like it when I’m not in control 🙂

But in the end it worked out great!

We took a tour at the Black Water Rafting Co, which was said to take 3 hours. It did, but that was including changing your outfit, driving to and from the location, showering and having a drink afterwards. The prices are pretty hefty and as you’re going into dark, wet places, you can’t take any pictures. So of course, the company offers to do this for you, at another hefty price. I refuse to pay crazy amounts of money for a few pictures that don’t even really include me, so I passed on that one.

So yes, money-wise I didn’t really like the Black Water Rafting Co.

There are cheaper options around, but if you come in on the Kiwi Experience bus, those options aren’t really mentioned to you. But as far as I know, the other companies in Waitomo don’t really offer the same experience either. If you want a thrill and an experience of a lifetime, the ‘black water rafting’ is definitely a lot more than any of the other options.

Picture this though: you’re in a rubber tube, floating along a cold river in a completely dark cave.. All you see are tiny blue flecks all over the ceiling above you.. and your tour guide in the background singing the theme song of Lord of the Rings.. Priceless!

(PS: as I didn’t pay for any of the pictures of the tour, the photo displayed was taken from the ‘Waitomo Glowworm Caves‘ Facebook page, credited to Corin Walker Bain)

Because a video of you hurting a fish is ‘SOOO FUNNY’