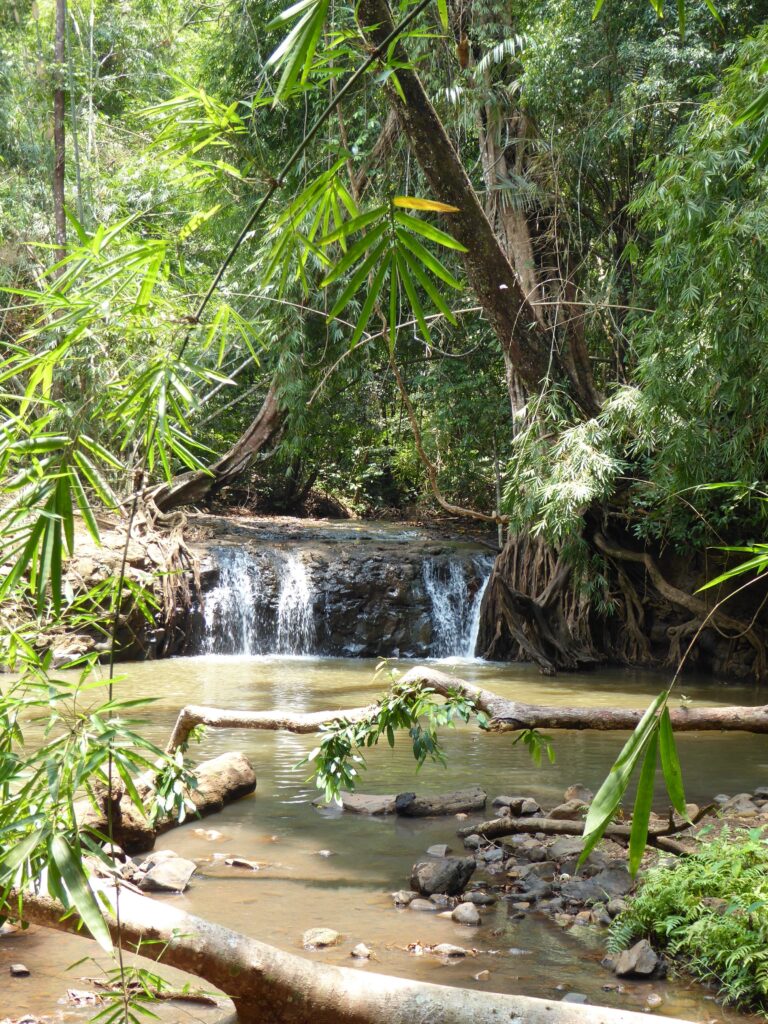 Me and my cousin were in Phnom Penh and wanted to visit the east of Cambodia, which is a region that is not often visited. We looked at the map and saw that we’d have to go to a town called Sen Monorom. We tried to get a bus there, but the guy we asked didn’t recognize the destination and referred us to another agency.. Hmmm: that doesn’t bode well!

So we went to the agency next door and asked to go to Sen Monorom.. The guy took some time looking around and finally said: ahhh, Mondulkiri… I can arrange that.. Wait, what?? That’s not what we said.. Apparently Mondulkiri is the region and Sen Monorom the town, but as it is to infrequently visited, they just call it by the regions’ name.. Just to make things nice and simple 😉

But good to know: now we at least know we’re going in the right direction 🙂

We got to Mondulkiri and struck a conversation with a local guy: the area is known for its jungle trekking and elephant camps, and we wanted to make the best of our stay there. There are plenty of organizations to choose from, some run by local people, others by foreigners who are trying to make a living.. The latter are usually more expensive and the local community doesn’t profit from the money spent there. So the logical option was to choose an organization that gets all their resources to and from local people.

We signed up for a 2 day trip: the first day was a jungle trekking, the second an elephant day. We were driven to a hill tribe village, where we met our guide and another tourist who was joining us for the day.

Now it’s very hard to describe our trekking.. It was the most amazing trekking I’ve ever done!! It was a proper jungle-trekking: the guide brought a machete to cut away the path for us! The hills were so steep at times that he had to cut out holes as a stepladder for us to climb… So unbelievably cool!! And there were even monkeys! (Not the type that linger by the side of the road to steal food from tourists, but proper jungle-monkeys)

We went about all day, going from cashew plantations, through jungle, to dry fields that could have just as well been somewhere in Africa, crossing rivers (and falling in once as well!) and through bamboo forests.. It was so massively diverse, challenging and beautiful!! I didn’t really even have the presence of mind to take a lot of pictures.. I was just taking it all in! 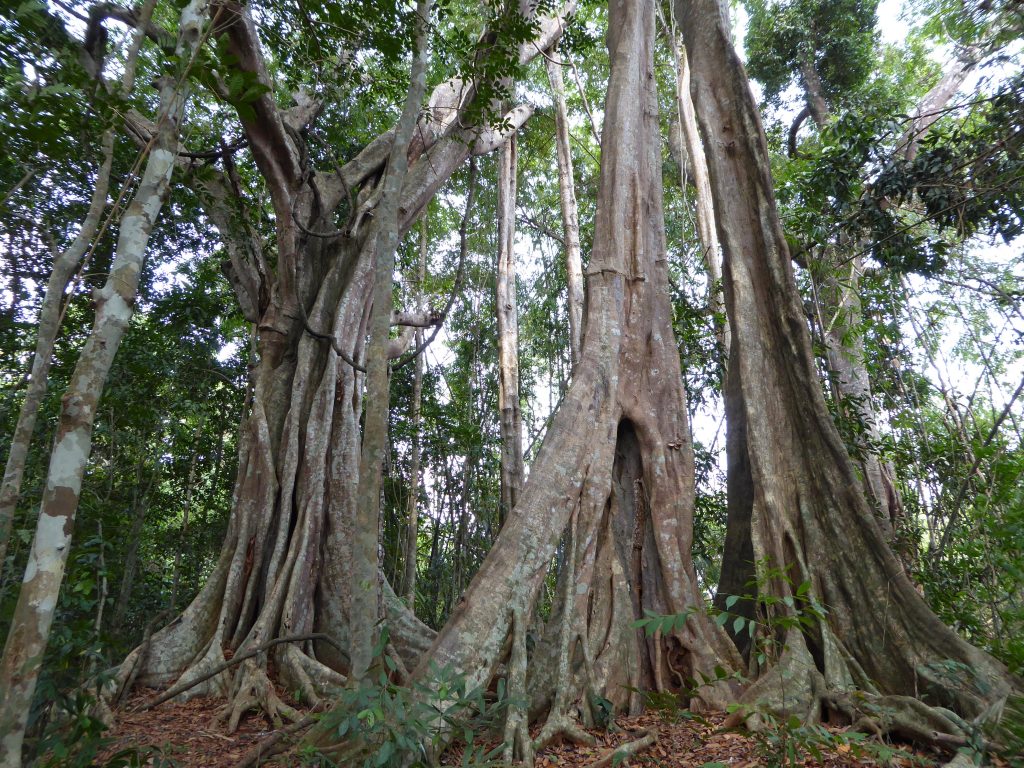 So the trekking was amazing! We did a full loop to get back to the village where we had started and stayed there for the night. We had a homestay where we got dinner, a hammock to sleep in (which was strung up in the kitchen shed), breakfast and the company of a whole truckload of animals.. It was a very basic stay and we didn’t really get to speak to the family at all.. (They didn’t seem to speak a lot of English)

After breakfast our new guide arrived with another companion, and we took off towards the elephants. Several of the villages in the area own 1 or more elephants. In the past they were used for logging or other hard work, but recently this has changed. Now the main purpose for them is tourism. The elephants are walked a few times a day (it’s cheaper to let them forage their own food in the woods than to have to buy all the food for them)

We got to join the Mahout (elephant trainer) in his daily business.. We walked the elephant and fed it bananas and other fruit we found along the way. After lunch the elephant walked itself into the river where we got to wash it. 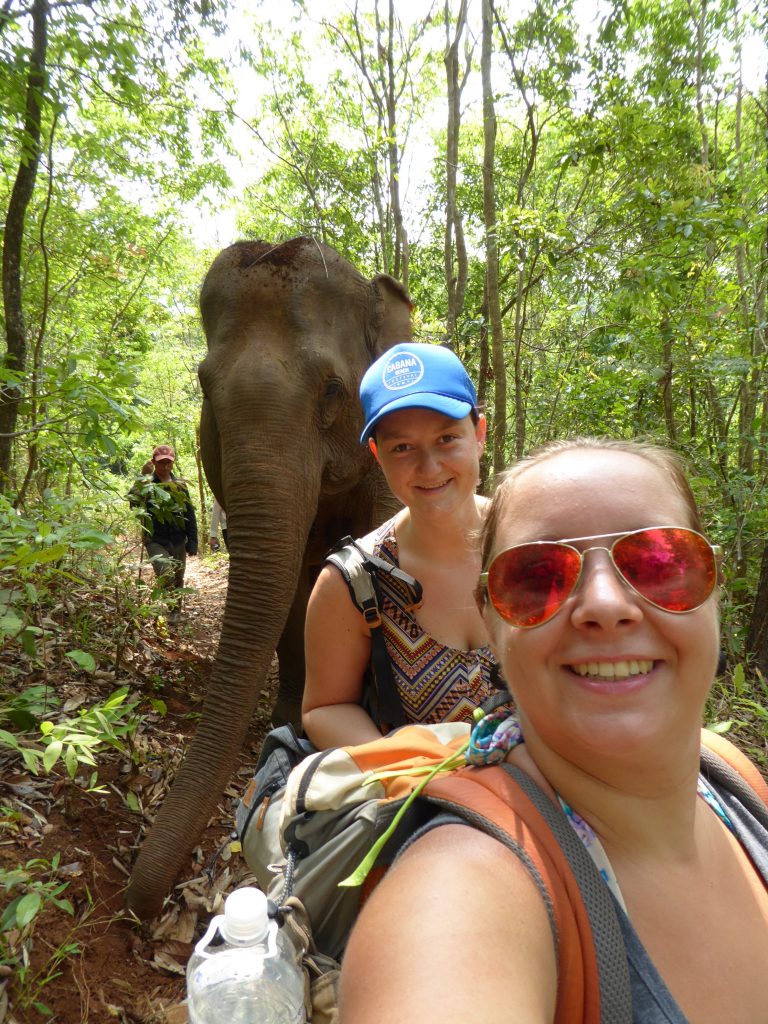 I’m not a very tall person, but I thought ‘our’ elephant was not very big. That is, until I got into the river with it! When it sat down in the river it was fine, but sometimes the elephant just got up all of a sudden, and then it was pretty impressive! I was always worried that it would step on my foot while standing up, but luckily that never happened!

We spent well over an hour washing and bathing the elephant. After it got out of the water, it took about 20 seconds before it started rustling up sand again, to throw on its back.. (The sand helps keep them cool) All that hard work, just to be dirty again after 20 seconds.. Ah well, we tried! 🙂

We said goodbye to the elephant and Mahout and hiked back to the village, where we got a pick-up back to the main town. I had expected to see more elephants (we only saw 2) but was able to get a lot more quality time with them than I would have thought. I love the fact that they’ve stopped offering elephant rides and the animals finally seem to be treated with the respect they deserve. They are truly amazing creatures!

Getting tattooed on holiday: YES or NO?

November 17, 2020
We use cookies on our website to give you the most relevant experience by remembering your preferences and repeat visits. By clicking “Accept”, you consent to the use of ALL the cookies.
Cookie settingsACCEPT
Manage consent

This website uses cookies to improve your experience while you navigate through the website. Out of these, the cookies that are categorized as necessary are stored on your browser as they are essential for the working of basic functionalities of the website. We also use third-party cookies that help us analyze and understand how you use this website. These cookies will be stored in your browser only with your consent. You also have the option to opt-out of these cookies. But opting out of some of these cookies may affect your browsing experience.
Necessary Always Enabled
Necessary cookies are absolutely essential for the website to function properly. This category only includes cookies that ensures basic functionalities and security features of the website. These cookies do not store any personal information.
Non-necessary
Any cookies that may not be particularly necessary for the website to function and is used specifically to collect user personal data via analytics, ads, other embedded contents are termed as non-necessary cookies. It is mandatory to procure user consent prior to running these cookies on your website.
SAVE & ACCEPT
FacebookTwitter