So I was in Dublin for a couple of days, just having a short break with two friends.

I planned to go there on my own but when they heard of my plans, they decided to come along. (Really, they decided.. I didn’t get a say in it.. not that I minded)

There are a lot of things to do and see in Dublin, but as both friends had never seen any part of Ireland yet, I figured it’d be nice to go somewhere outdoorsy.

So for one of the days, we planned to take a day-trip to Howth, which is a suburb of Dublin, but is kinda separated onto a peninsula.

The easiest way to get there (as a tourist) is by train. There’s a direct connection from the central train station in Dublin straight through to Howth, with several stops along the way. It’ll take you little over an hour to get there, but it’s very easy and cheap as well.

That is, IF you get on the right train…

Here’s the deal: my friends apparently aren’t that topographically inclined.. They indicated a certain platform and said that the next train would be ours. Alright, we’ll do that. So we sat in the train, which has a nice system of lights showing the specific station you’re passing on a map. At one point in time I noticed that the lights indicated a stop that was not supposed to be on our route.. Well that’s a bit of a problem, isn’t it?

After we all agreed that this indeed was not the way to go, we decided to get out at the next stop. My friends looked at the train schedule again, and indicated that if we took the next train from the second platform, we’d be on another direct train to Howth. I remember thinking that was excellent: a direct connection coming from several stations!

Apparently, that was not the case.. So about 1,5 hours later we found ourselves back at Dublin central station, having seen some of the scenery of Northern Dublin, but without having been to Howth. Let’s say the third time is the charm 🙂

The train schedule displayed was a bit different from the ones we have in the Netherlands. I’ll give my friends the benefit of the doubt and say I can understand why they misunderstood 😉 But the third time, I offered to check the schedule instead. Roughly an hour later we were finally there!

As Howth is on a peninsula, it’s obviously surrounded by water. And where there’s water, there’s bound to be a harbor. Howth in itself is quite small, but the harbor is pretty big in comparison and nice to look at.

When you pass the harbor and walk on down the coastline, you’ll find the start of several small hiking trails. (It’s real easy to find, we managed in one go and that’s saying something) You can choose a lot of different trails, dependent on your physical fitness and the amount of time you have.

As we’d already lost a big chunk of our time on the train, we weren’t up for taking a long route. We decided to take one that was indicated as around 2,5 hours. That indication was actually pretty accurate, which doesn’t happen to me that often. It turned out to be a path that first lead along the coastline, after which it cut through the open landscape back to the main road. It was gorgeous and if we’d had more time we would definitely have taken a longer route. The one going up to the lighthouse sounded especially wonderful. We got to see the lighthouse from afar but figured it would look even more wonderful up close. 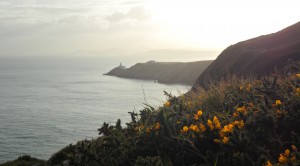 After our long walk we strolled into a little tea-shop to warm up and enjoy a snack. That was definitely a valued treat! Fortunately, the train station of Howth is the end of the line, so if you want to go back into town, there’s not really anything you can do wrong. That was definitely a comforting thought and it enabled us to get back to Dublin in one go.

I was so proud!