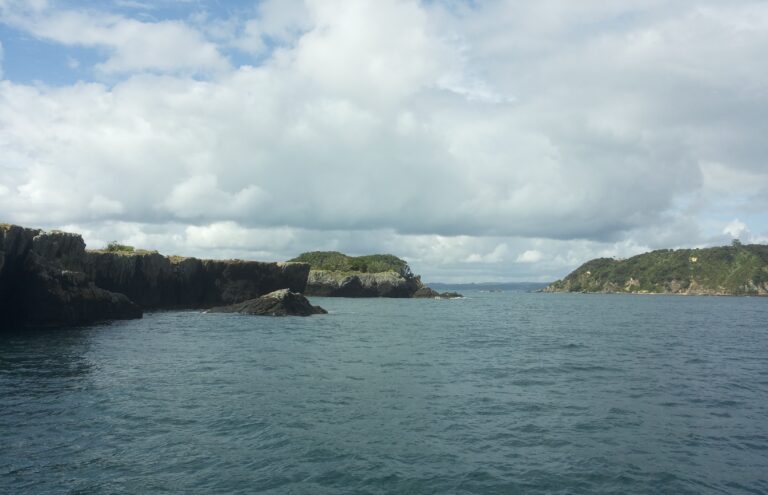 When you fly to New Zealand, you’re most likely to fly into Auckland, which is by far the biggest city in the country and also has a nice and spacious airport. Very handy indeed, as making that trip per kayak might be too much of a stretch!

Auckland is situated at the base of a peninsula. If you cross Auckland onto the Northland Peninsula, there are only a few well known spots available. So a lot of people automatically skip this area and head straight for the more famous parts of the country. I did not and I would definitely recommend everyone to follow my example. Not just because it’s beautiful there, but also because I would really feel very important if you actually took my advice on something..

One of the main attractions in the Northland is the Bay of Islands. The name really says it all: there is a bay, and in that bay are hundreds of islands. I don’t know the actual number, but I think it wouldn’t sound very catchy if it were called ‘the Bay of 243 islands’. Just doesn’t have that ring to it, now does it? 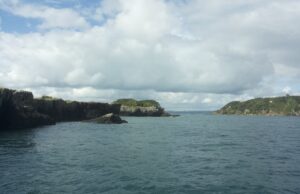 As it is such a tourist-magnet, there are several operators who offer trips to see this bay, leaving from mainland Paihia. When we drove up to Paihia, our bus driver expanded on all the different options, among which the ‘cream of the bay-tour’. He really didn’t say much about it, other than that is was by far the most boring tour of them all, and that he did not recommend it… Well, isn’t that nice?

I’m always a sucker for the underdog, so such an opinion doesn’t really mean anything to me. Plus, the bus driver was  mainly speaking to 20-year-olds who spend the majority of their travelling budget on alcohol, so I didn’t think that I was his target audience anyway.

So despite the warning of our driver (or maybe even because of his warning) I booked the ‘cream of the bay’ trip. And I’m glad I did. I didn’t do any of the other tours around the bay, so I can’t judge whether this one was better or worse. All I can say is that I had an absolutely wonderful time!

The boat we were on was completely lined with chairs. So as a result, most people sat on these chairs (predictable, isn’t it?). Me and my friend Dani found out that the bow of the boat was also open for guests, and you could just sit on deck or lean against the railing. That suited us a lot better, so that’s what we did.

The weather wasn’t that great and as we weren’t sheltered from the wind (we would have been if we’d just sat on the chairs like we were supposed to) it was pretty cold. But in our opinion, we had the best seats in the house. When we spotted a group of dolphins, me and Dani had front row (or front railing) seats to watch them. That was absolutely worth the cold. 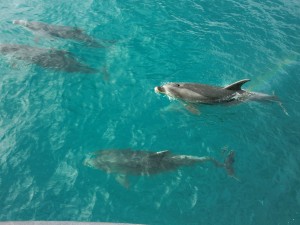 Normally, you can swim with the dolphins you encounter. New Zealand has very strict wildlife preservation laws, and one of them states that you can’t get too close to dolphins that have young. The young ones are too fragile and being in close contact with humans might cause their deaths. The dolphins we saw had young as well, so we stayed on the boat. Watching them was already amazing, so the disappointment was soon forgotten.

After seeing island after island after island, we went to another island (surprise!) for our lunch break. We were advised to climb to the top of a hill on the right side of the island as it would be a very nice spot to enjoy your lunch. They sure weren’t lying about that! 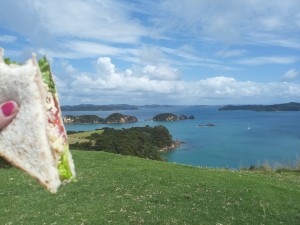 Later on, we got the chance to go boomnetting (I think that’s what it was called). They hung a big net on the side of the boat and people could sit in that net. It was then dropped in the water and dragged around. I didn’t go in, but it was definitely entertaining to see everyone being dragged from one side to another in the water.

All-in-all it was an amazing trip. We saw so many islands, it was unbelievable. Everywhere you looked there were islands. Just look at my pictures closely. See those pictures where you can see the mainland in the background? That’s not mainland 🙂 Just another island. And another one, and another one.

I had a great day and I really don’t see why this trip would be boring. Maybe because the bus driver himself was boring.. maybe because there wasn’t much alcohol on board the boat and the driver’s audience would require alcohol to have a good time… I don’t know. All I know is that I had a wonderful time on this boring trip and I’m glad I picked the underdog!