Earlier this week I wrote a blog about my day trip at the Bay of Islands in New Zealand. We saw dolphins along the way, out there in the wild, pretty much being themselves. Thinking about that day got me wondering..

What do I like best? Dolphins that can do neat little tricks and let me get up close and personal? Or dolphins in their natural habitat, just being wild and accepting you as long as you behave and keep your distance?

Years ago I was in Curacao. We went to the sea-aquarium, where you also had the opportunity to swim with dolphins. Trained dolphins.

Let me paint you a picture:

We had a group of about 10 people, who went into the water simultaneously. There were a couple of dolphins. The dolphins were more or less instructed to roam around freely throughout the basin (kinda contradictory, isn’t it: being told to do whatever you want) and we followed them around, trying to pet them. It was easy keeping up, because these were by far the slowest dolphins I’d ever seen.. (which they really weren’t, but did so as instructed.. which for them must be really boring)

The cool thing about this encounter was that the dolphins had some neat tricks that you could do with them. Every one of us could pick 2 tricks to perform with the dolphins, varying from getting a kiss, to having them do a back-flip or drag you along by their fins. Absolutely amazing to experience! But can you imagine a wild dolphin allowing you to clutch their fin to get dragged along? Can you even imagine a wild animal wandering about, waiting for you to pet it? 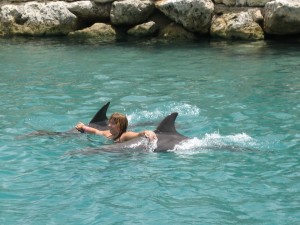 The first thing that popped into my head was: a dolphin that does that, is not a genuine dolphin. It doesn’t do what it would do if it were given a choice. Now I’m not saying that trained dolphins are bad, or that you should never swim with trained dolphins. I absolutely enjoyed the experience. But in my opinion, I can’t really say that I swam with real dolphins. I swam with a pet animal, that happened to be greyish and looked like it would eat a lot of fish given the chance. But it was not a real dolphin.

I guess real dolphins only exist in the real world.

If magic really existed, would you want to know?