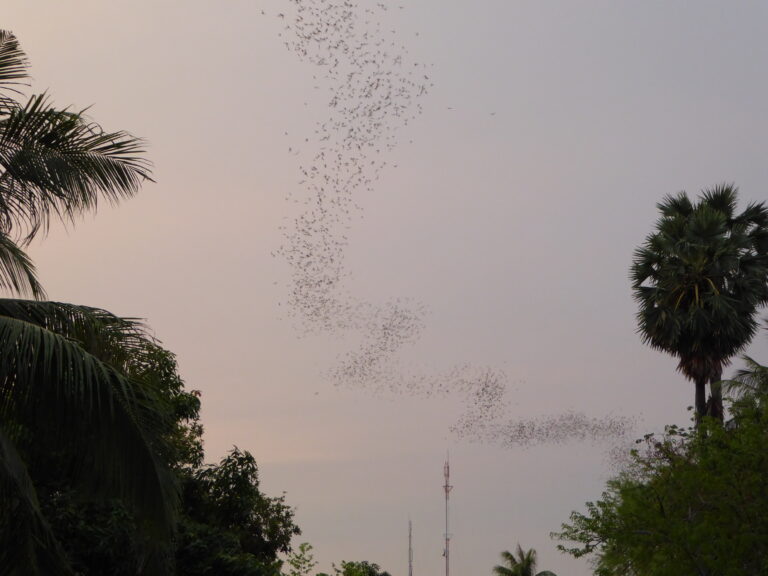 Most people I meet only spend around 2 weeks in Cambodia. Some maybe 3, but not much longer than that. We spent 4 weeks here, so we got to do and see a lot more than most people. One of the reasons we had time for the somewhat unusual stop of Battambang.

After leaving Siem Reap and Angkor Wat behind, we needed to find activities that didn’t involve temples.. (after seeing so many temples you’re kinda templed-out for a while) So our first next stop was Battambang. Usually you can take a slow-boat over the river to get there, but we were there during dry season, so the river was nearly completely dried out and boats really didn’t stand a chance of getting down the river in one piece. So we took the bus in stead.

When we got out of the bus there was a group of TukTuk drivers ‘fighting’ for our attention. They all offered to take us to our hotel for $0.50, hoping that we would pay for additional services later on. It’s obviously low season when drivers are willing to give away their services like that. After some ienie-mienie-minie-mo we picked a driver and got to the hotel. I would’ve booked further tours with him, if he’d played his cards right. But he didn’t. In stead of waiting for my call, he showed up in our hotel room the next morning asking if we were going to book anything with him..

Now I know that privacy standards are a bit different in Asia, but even here privacy should start at the hotel door. When I’m enjoying my afternoon nap, I don’t appreciate being rudely woken by a guy trying to make money off you. It tends to put me off the whole idea. So I told him off and booked a tour with another driver.

Throughout Cambodia there are remains of the regime of the Khmer Rouge. Battambang is no different. One of the sights to visit is the Killing Cave. A 30 meter high cave that was once a Buddhist shrine, but later on transferred into a mass grave by the Khmer Rouge. Mostly, they would just throw people down from the top of the cave, to (hopefully) fall to their deaths 30 meters below. If you were unlucky, you would be hurt, alive, and surrounded by bodies and just left there to rot.. Nowadays there’s a nearby temple, and some of the remains of the victims have been recovered for a monument. It makes for a grizzly sight, added to by a really ugly and unnecessary “artwork” that is propped up at the entrance. It kinda looks like the scene from some cannibalistic ritual… I don’t get the story behind it, but it didn’t improve my mood!

There was a nice viewpoint and a handicapped monkey who wanted to get some attention. Nice for a few minutes, but not what we came for. That part came later: the Bat Cave. No, it’s not Batman, no Robin, or any of the other superheroes around.. They simply have a cave where millions of bats live, and every evening at sunset they fly out of the cave to go feed at a nearby lake. It takes about 20 minutes before this enormous procession of bats has left the cave and it is a really cool sight. Fun fact is that bats are blind and fly on sound. Initially they will fly in a straight line, but when you clap your hands, they will deviate and start swerving. It’s a wonderful sight! 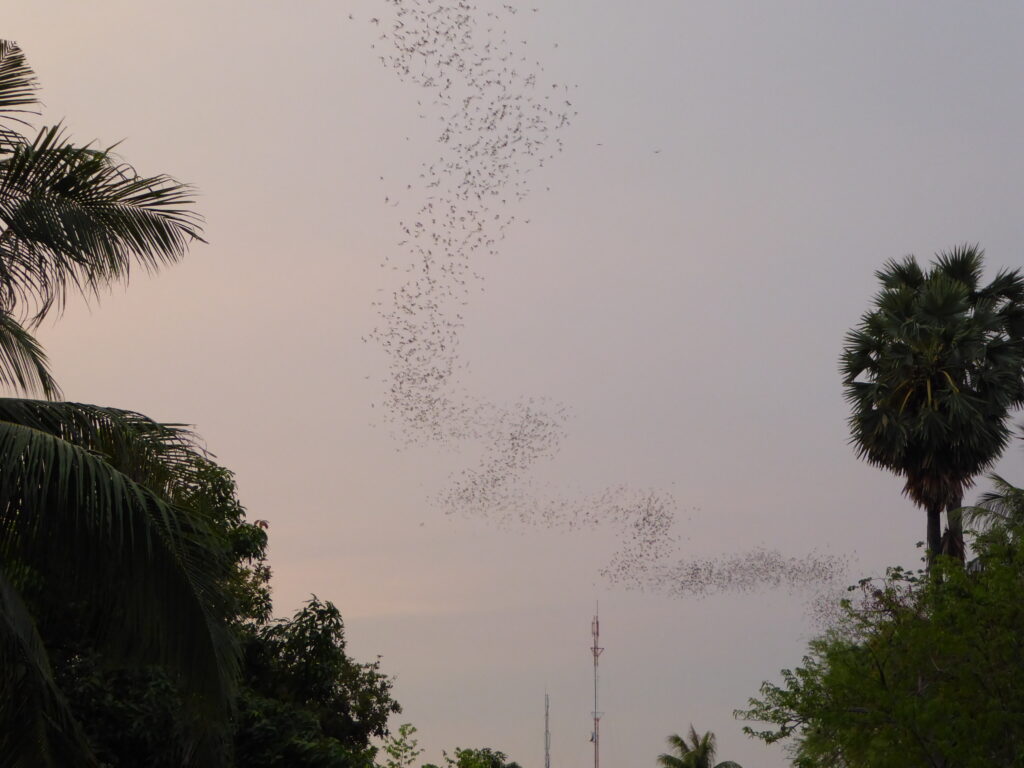 How NOT to drive a motorbike through Vietnam

The horrible history of Cambodia