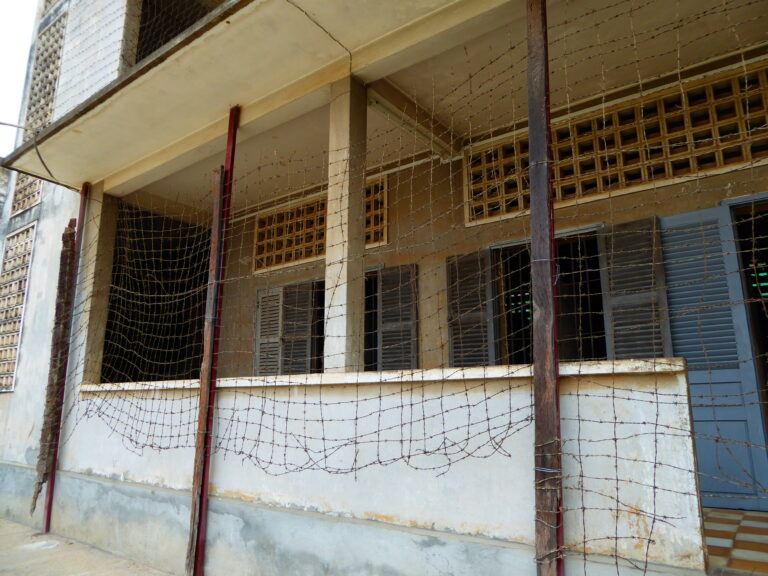 For me, travelling is all about exploring a country; getting to know the place inside and out. That means not only seeing the landscapes and understanding the culture, but also taking an interest in its history.

In Cambodia there is a lot of history and it is simply horrifying. If you are in Phnom Penh, the main things to do involve looking at this history: you can visit the Tuol Sleng Genocide Museum and the Killings Fields. It’s easiest to combine them both and visit them on the same day.

So the day after my cousin arrived in Cambodia we set off to see both museums. It was very hard for my cousin, because she was not yet used to the heat and had a bit of a jet-lag.. and then the stuff in the museums can make you sick to your stomach as well! She decided to listen to the audio tour while sitting outside, while I walked through the museum.

The audio tour in Tuol Sleng (also known as S21) is very good and provides you with a lot of additional information to explain all the pictures on display. The stories are gut-wrenching! Under the regime of the Red Khmer and Pol Pot, almost 25% of the Cambodian population died!! That’s around 3 million people! Many of them were tortured in prisons such as S21 and then brought to Killing Fields to be murdered and dumped into mass graves.

Pol Pot’s regime had unbelievable methods and ideas: they wanted a communist state that was fully funded by growing and exporting rice. Almost all Cambodian people were forced to move around the country to work in the rice fields, but conditions were so bad that many people died while doing this work.

Next to that, the Khmer Rouge didn’t want any opposition. They felt that every intelligent person posed a threat to them, so they had educated people arrested, tortured and killed, along with their entire family (they didn’t want to keep family alive because that family might want revenge in the future). Foreigners who entered the country oblivious to the situation were treated to the same: two New-Zealand travelers on a sailing trip happened to come ashore at the wrong time and were tortured and murdered. A part of their story was told by their brother on the audio tour.. it was heartbreaking and just simply unimaginable: how a group of people can have such twisted ideas and somehow gain control and destroy a whole country… and then still convince themselves that they had the best of intentions and were doing it all for the good of the nation.. It’s truly unbelievable and I still cannot wrap my head around it! 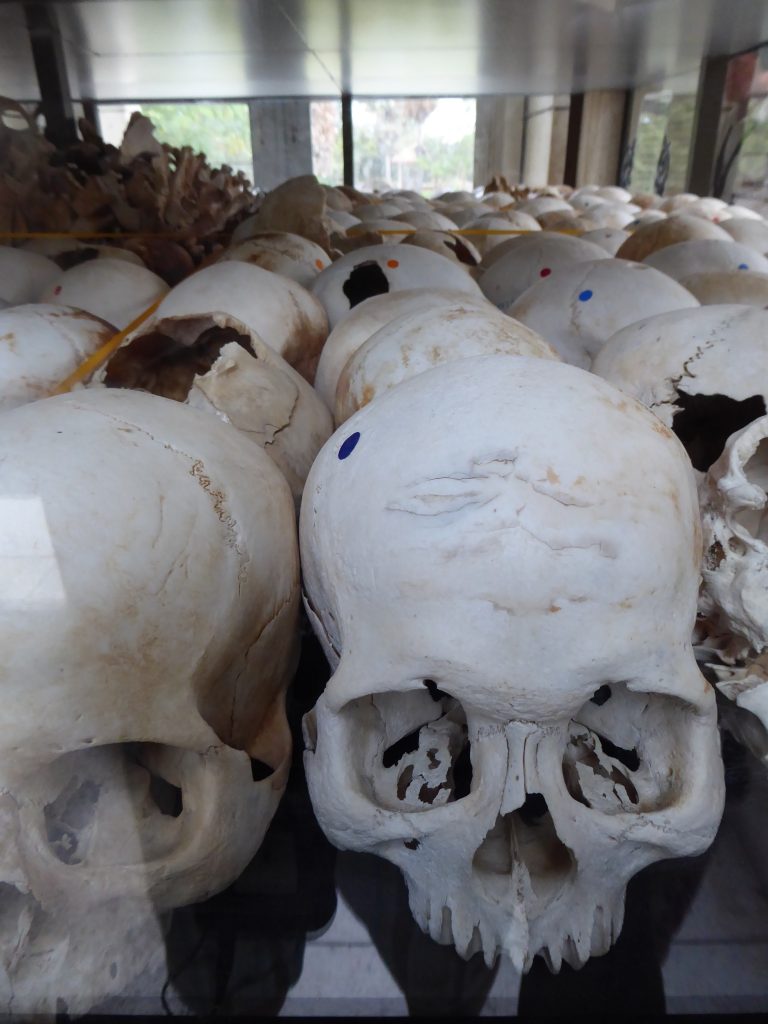 It’s very hard to explain the vastness of what happened here… In S21, there were pictures of former prisoners on display. All prisoners were photographed upon arrival, but their files were destroyed.. so only pictures remain. These prisoners were never seen again: only 14 bodies were found on the premises, the rest of the people disappeared.. About 22.000 of them! Only pictures remain, and they’ve never been identified.. So all these pictures, all these faces have been put up, so that if people are missing a loved one, they can come and look at the pictures and hopefully identify them.. It’s been 37 years, and still thousands and thousands of pictures remain. Why? Well, who’s going to identify you when 25% of the population died? When there’s a good chance that nobody who knew you has survived? When your family was probably taken captive as well, just because the regime didn’t want you around?

And that’s just the S21 museum! Then you get to the Killing Fields. The name says it all but says nothing at the same time.. it’s a name and if you listen to it closely, you’ll know what it is.. But it isn’t.. You think ‘Killing Fields’ and it sounds like they just had to name it something.. But it says exactly what it was: a field, where they dug big, 5 meter deep holes.. They brought prisoners here and executed them on the edge of the hole and then just dumped them in there.. Whether dead or still alive.. And when the hole was full, they just dug a new one next to it and started over.. pits full of dead bodies..

There are so many bodies here, that the government has decided not to excavate them anymore. Around 8.000 skulls were recovered and given a place in the memorial that’s been built next to the Killings Fields.. The rest of the victims remain buried.. Or at least, they aren’t actively searched for: whenever there is heavy rain, bones and clothing tend to float up out of the ground. If they surface, they’re tended to. If not, they’ll just remain as is. There’s just too many of them in the ground.. 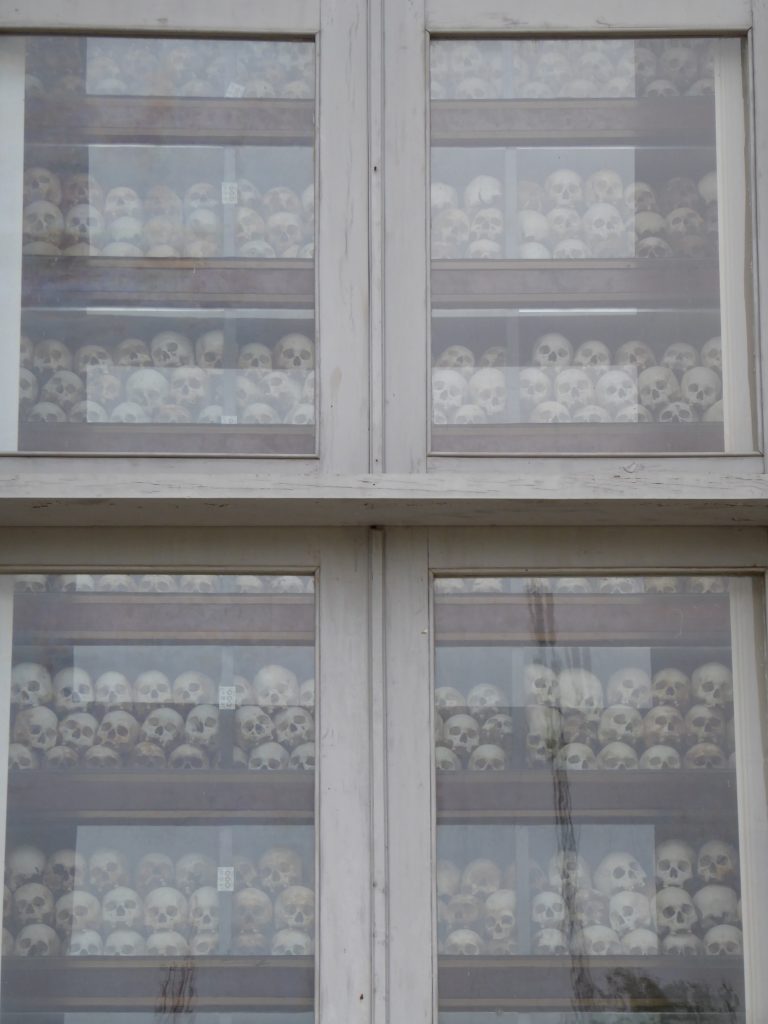 Can you just think about this? A field, just a regular open field, say it’s the size of half a football field.. and there are probably around 22.000 bodies beneath it, just tossed aside in a pit and left to rot. Human beings, discarded because some crackpots decided they wanted to change the country. And it’s not just this place! Estimation is that there are over 130 similar sites spread out through the whole of Cambodia. 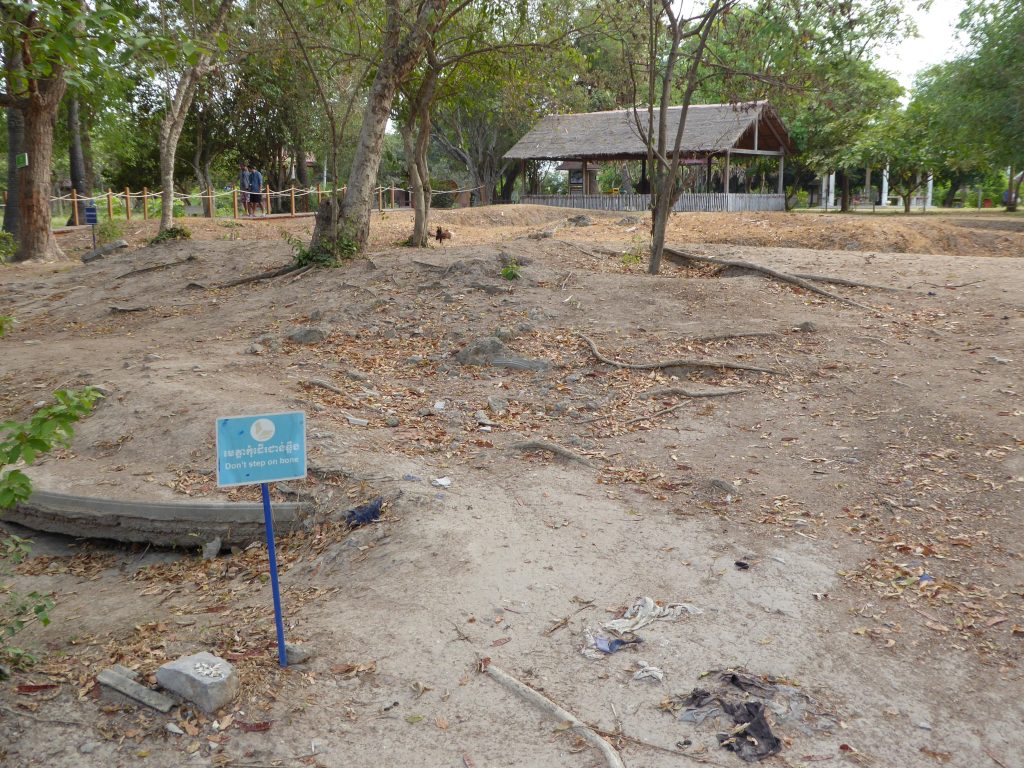 After visiting both sites, and listening to all the stories and seeing all the (sometimes gruesome) pictures, you have no choice but to think about this.. to think about the world and what’s happening to it.. You look at the smashed-in skulls of 8.000 people on shelves and you wander: what did we learn from this? We? We learnt nothing.. Half of the world doesn’t even know what happened in Cambodia, and half the world seems to be repeating the same scenario. Different backgrounds or ideas maybe, but same scenario with likely the same outcome.

We humans are just plain stupid!