Luang Prabang is one of the larger cities in Laos, which means it’s still just a small town, really.
You can stay in town and just enjoy the atmosphere, or use it as a base for exploring the area.

I spent a couple of days with my friends in town: there are some temples to check out, you can visit the bomb museum or go to the public pool.. You can also get a Tuktuk to visit Kuang Si Waterfall, which is a very cool cascading waterfall where you can chill and swim in the streams! 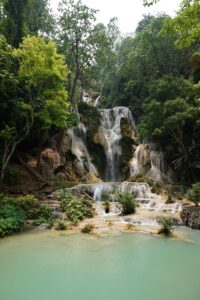 Whatever you do during the day: at night, Luang Prabang is crazy! As in: it doesn’t make sense… You can go to bars, have a drink and have fun, but somehow, at the end of the night, everyone ends up at the local BOWLING ALLEY!! Drunk people going bowling until the middle of the night… WOW! I don’t know who ever came up with that idea, but it’s awesome!

After a few days of relaxing, me and some friends wanted to do something more eventful. Emma had been talking of kayaking for weeks, Sarah and Otto really wanted to do a homestay and I was keen on doing some trekking.. So when we found a tour that offered 1 day trekking, a homestay and 1/2 day kayak on the Mekong river, we knew we had to do it.

I was quite surprised to hear that we would be the only people trekking that day and that we had the guide to ourselves. Once we started our trip, it became pretty clear why: it’s hot season here! That means temperatures well over 40 degrees Celsius, with hardly any shade or other means of cooling down.

I had been very sick the night before, but decided (against my better judgement, I have to admit) to go along with the trekking. It was horrible! I was still sick, overheated and dehydrated, and as the day continued, I felt worse and worse.

Our guide had offered us 2 bottles of water each at the start of the trip. I didn’t have room in my backpack to take both, so I asked him to hold on to the second one for me. But by the time I asked him for the second one, he had already drank it himself because he was so thirsty too! You can’t really blame him, but I didn’t appreciate it either! We found a hill tribe village where I bought some locally boiled water.. It didn’t look very right, but the guide ensured me it would be safe and it was pretty much my only option.. 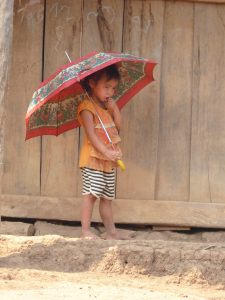 The final climb of the trekking was very hard for me, but with my favorite mantra in my head (just keep swimming) I managed to make it to the village where we had our homestay. I’ve never been so happy to see a bunch of bamboo huts surrounded by pigs and cows! 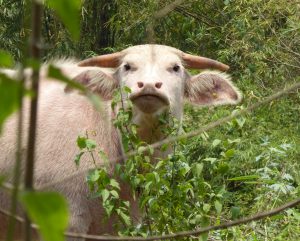 There was no electricity in the village, but there was a little house where they kept some drinks in the shade, in buckets with not so warm water.. That can of lukewarm Coca Cola tasted amazing!

There was also no running water in the village, except for a little well just outside of the town. We went there to wash up, only to find a few locals taking ‘a shower’ there: they got buckets of water from the well, and splashed themselves with it to clean up. That’s obviously fine, we really enjoyed the whole process, but can you imagine that this is your normal life? That you have never been in a real shower, but are only used to cleaning yourself with a bucket from a well, surrounded by 4 other townspeople? Can you? I can’t! Even after seeing it up close several times, I still cannot imagine how their lives are on a day to day basis. Our worlds are just too far apart! 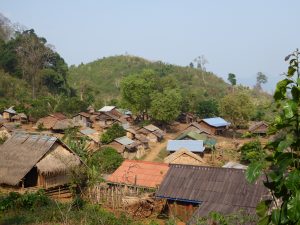 Because there was no electricity in the village, all the life stopped after sunset. Pretty much all the noises died after around 7 p.m. and we were given a few candles so we could at least look at the people we were talking to. But with nothing else to do, nothing to see and no energy after such a tiresome day, you’re actually pretty happy to go to bed at 8.30 p.m. 🙂

Next morning we woke up to the sound of wildlife: the village was full of roosters, pigs, cows and goats that were making their presence known. An all-natural alarm clock..

After breakfast we headed back down the hills. We had a few hours of trekking ahead of us, before we would reach the kayaking destination. I felt a lot better on the second day, but somehow it just wasn’t my day. I kept slipping and falling.. Somehow, my feet just didn’t want to hold me up!

First time I slid down some rocks and scraped my leg and knee.. Second time I hurt my butt, and the third time I actually slid in the mud and nearly destroyed my photo camera in the process.. I was glad to have a protective case around it! (I’ve tried to clean that case a thousand times since then, but the mud is still staying put!)

So when we got to the kayaks, nobody really wanted to partner up with me, afraid that I would flip the kayak as well.. 😉 At least it would have been a soft landing 😉

Emma drew the short straw and got partnered up with me. We made it through the whole trip without any problems, unlike Sarah and Otto who got stuck on a rock 😀 We went to Pak Ou Caves along the way, which are supposed to be one of the finer Buddhist caves to visit.. Call me spoiled, or call me uninterested.. But I really wasn’t impressed! There was a small cave with hundreds of Buddha statues.. and there was a big cave, up a high staircase, with a lot more statues.. hmmm…
Nope, it didn’t really do it for me! 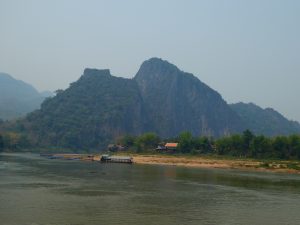 What also didn’t help, was that Sarah and me wanted to go to the toilet there, and some local woman came up to us charging us 9.000 Kip for it.. that’s $9,- !!!! She said that it was already a discount, because for the two of us it was supposed to be 10.000.. Usually you can easily barter down prices if you try, but this was such an outrageous demand, that we didn’t even warrant it with a response and just turned around and walked away. Bitch please, you crazy??? I’ll just pee in the Mekong!

We had another half hour to paddle back to our pick-up location. Dragged the kayaks back to shore through some piles of elephant dong, (there are a few elephant camps near there) got a shower at the drop off point and were taken back to our hotel.

I have to say: I felt pretty horrible the first day, and I didn’t really get through the second day without any problems.. but still, I absolutely enjoyed myself! It was a nice location, beautiful scenery and great group of people. I wouldn’t have done it differently if I could! What a great way to end my time in Laos! 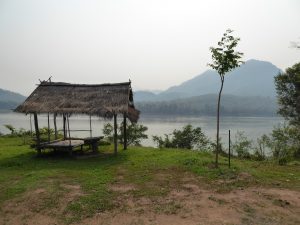 A ‘boring’ trip to the Bay of Islands, New Zealand 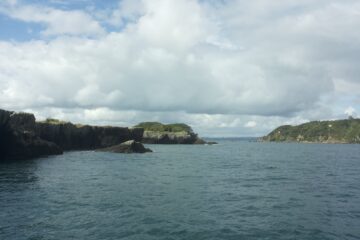