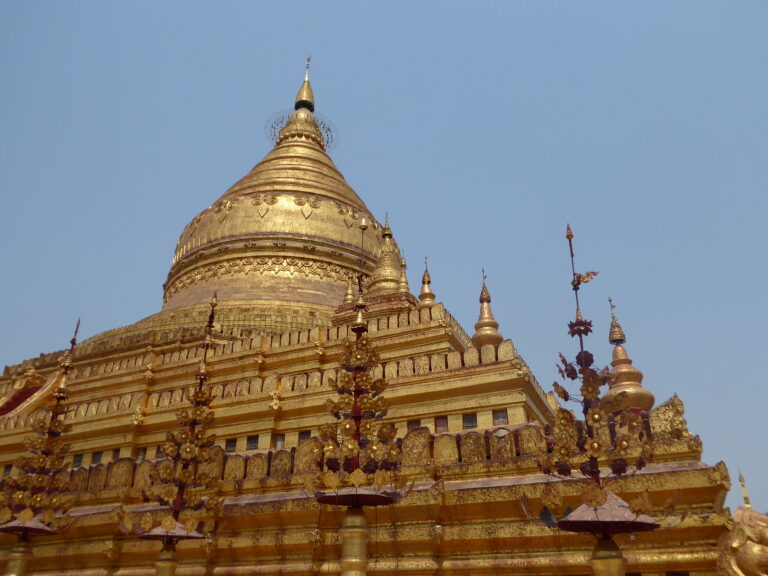 If you are looking for tourist information about Myanmar, one of the first things to pop up is Bagan: where you can find thousands of temples. Now if you think about it: what would that look like? Thousands of temples??? Can you imagine?

I surely couldn’t. I thought: wow, a thousand temples… sounds like a lot, but then, they’re probably just exaggerating to draw in tourists.. but thousands of temples.. come on, that will never be true..

It took me just a little while to start believing the stories!

Some background information: Bagan is not actually 1 town, but more of a combination of several towns: Nyuang U (where most locals live, and where you can find cheap accommodation), Old Bagan (where no one is allowed to live anymore and where you can find the majority of temples) and New Bagan (a few temples but mostly fancy hotels and resorts).

Me and my friend found a cheap guesthouse in Nyuang U (View Point Inn) and rented an E-bike (like a scooter, but running on electricity) for a few days. We started driving around Nyuang U, looking for the first temple we could find. There is a massive temple complex in the middle of the town, which is still actively used, so it was very busy there. It was beautiful to see, but it didn’t really fit our image of Bagan: I thought it would be old ruins, and here I am looking at a beautiful golden stupa with monks everywhere… hmmm, this doesn’t match.. 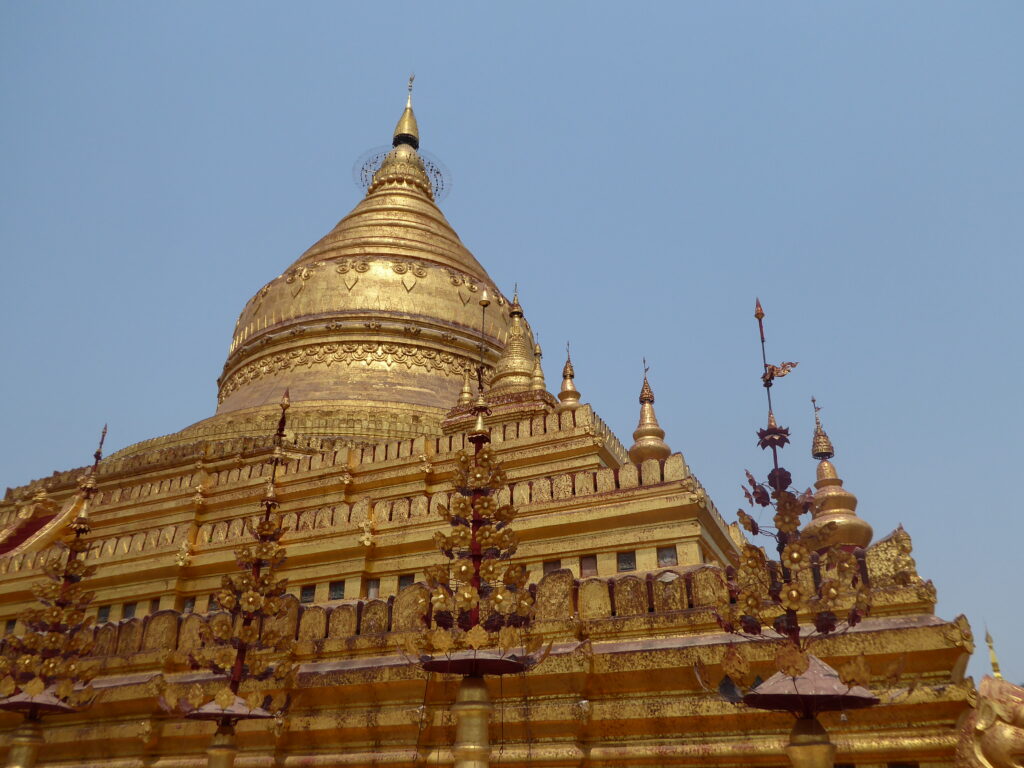 So we drove on.. My friend Sami was riding along as my passenger and would just look at the map and point in the direction of any random temple she could find on there.. So we saw a few more small temples, and found the back entrance to the big temple we visited before.. still not very impressed..

But then we drove West outside of Nyuang U towards Old Bagan.. from where we were driving, we could see a few temples popping up on our right, and we decided to just drive up there and explore.. The fun thing about Bagan (if that’s your idea of fun) is that pretty much everything is off-road! So you rent a crappy little scooter, have a passenger, and then have to make your way through dirt-tracks to get to where you want to go.. Let’s just call it a nice little challenge 😉

We made our way to the temple we had seen and walked in.. There was a caretaker there, and he asked us if we wanted to go up to the roof… hmmm… that sounds like a good plan! So we went up.. and that’s when we finally understood the enormity of Bagan! 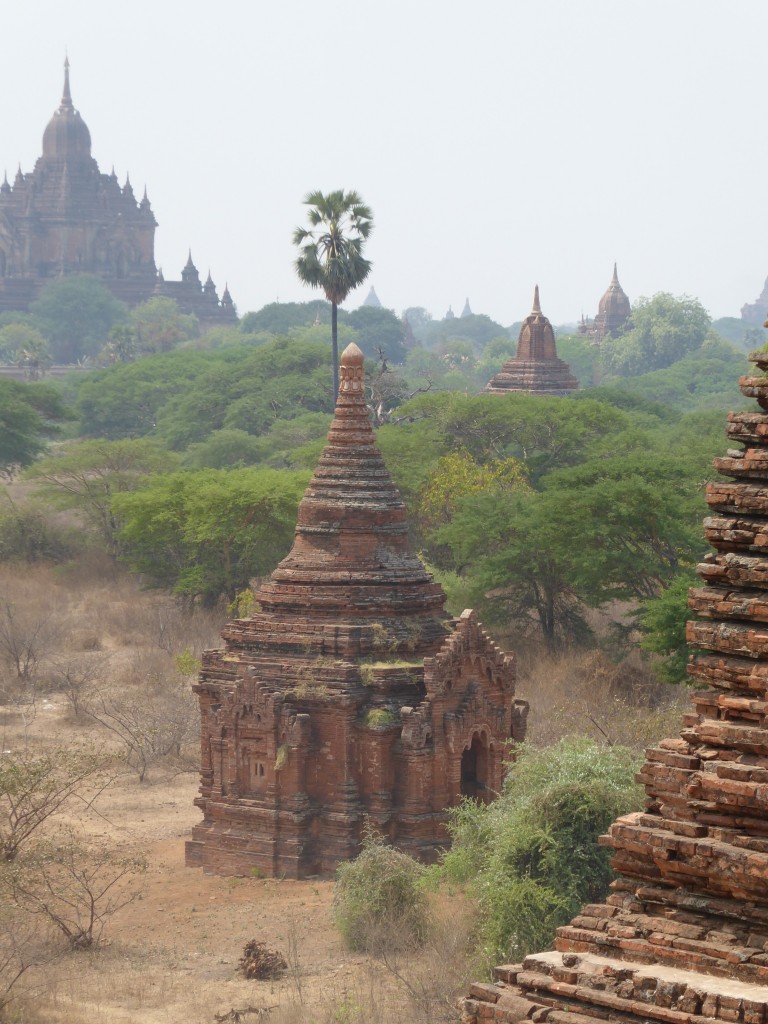 Now me personally, I don’t like busy, touristy locations.. I don’t like big crowds, especially when travelling: I try to avoid other tourists. In Bagan, all the tourists are automatically drawn to the big temples: busloads full of Chinese people, dozens of bikes with backpackers, all at the same temple at the same time.. That just doesn’t do it for me. I prefer to feel like I’m exploring something, like I’m the first person in the world to discover a certain spot. So me and Sami decided to not see any more big temples, after we had seen the first one and all the tourists surrounding it.

In stead, we chose to explore all the small temples in the area.. Or all…. let’s just say we tried to see as many as possible, in the few days we were there. Some temples you can go into, or even find a way to climb up to the roof.. others you can only just walk around.. There is a lot of diversity. 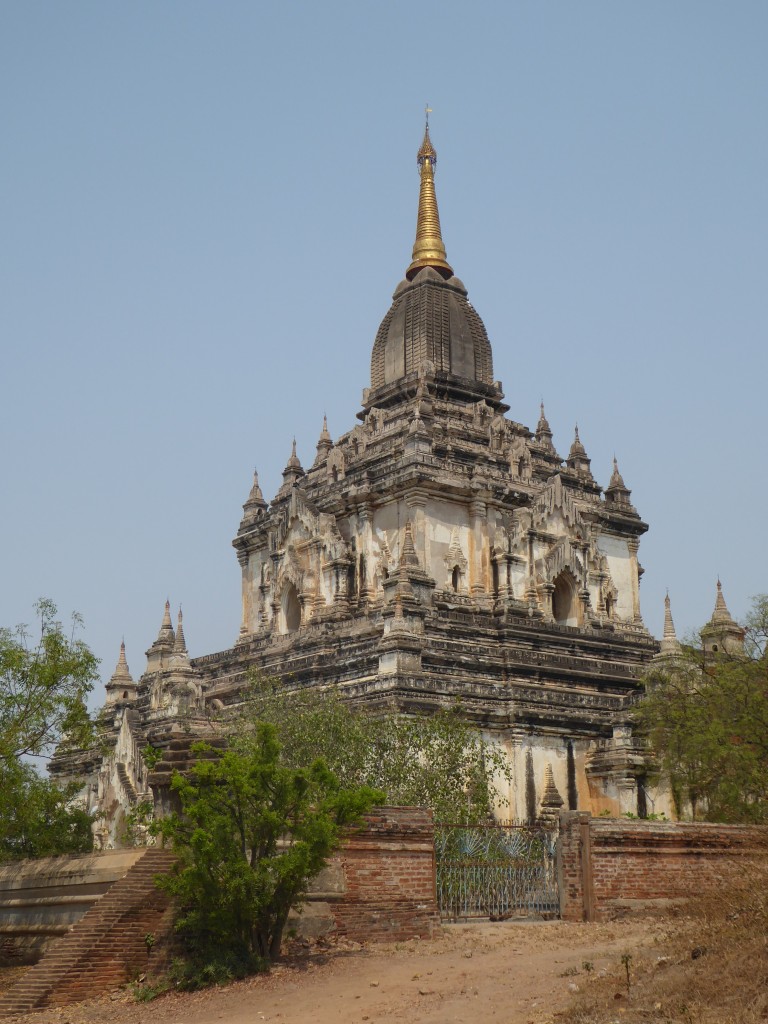 Now one of the main things about Bagan is the sunset and sunrise. Everyone will recommend watching a sunset and a sunrise while overlooking the temples. In our case we saw 2 sunsets, which were both crappy (too cloudy so you couldn’t actually see the sun going down) and we wanted to find a decent place for the sunrise. We had some problems with our bike (ran out of battery and didn’t get a proper replacement) so we didn’t have an option to find a nice sunrise temple the night before.

So we got up at around 5 p.m., got a new scooter and started driving around to find a sunrise spot. First of all: in Myanmar it is very normal that people burn their trash by the side of the road at night. So if you are driving around at 5 a.m. you are likely to see a lot of fires everywhere, even some circling some of the temples. It’s a very cool sight, but we didn’t take any pictures because we needed to hurry up and find ourselves a sunrise spot..

So we drove and drove, circled and circled, but couldn’t find the spot that we were looking for.. and the places that were available already seemed to have busloads of tourists.. so that was a no-go. All of a sudden a local guy pulled up next to us and asked if we wanted to see the sunrise, in a place where no tourists would be.. well yes, we would very much like to!!

We followed him over a dirt road (in the dark, on an E-bike, with a passenger: oh, the joy!) and got to a temple.. we first went up the regular staircase to the roof, but then he said we could go up further, just climb onto the top.. So we did. He joined us and told us all the stories about Bagan, how it once had about 5000 temples but many got destroyed in earthquakes, about how locals learn their trade when they can’t afford to get an education, about how they live, about how he tries to find tourists every morning to take to the sunrise, to give people a unique experience and for himself to live by Buddhist standards by helping strangers.. It was all massively impressive.

One of the main tourist activities in Bagan is flying in a hot air balloon during sunset or sunrise. It’s massively expensive (around $350,- per person) but I can imagine it’s very beautiful. However, the view we had of the hot air balloons flying over Bagan, was at least just as beautiful, and even better: free of charge!! 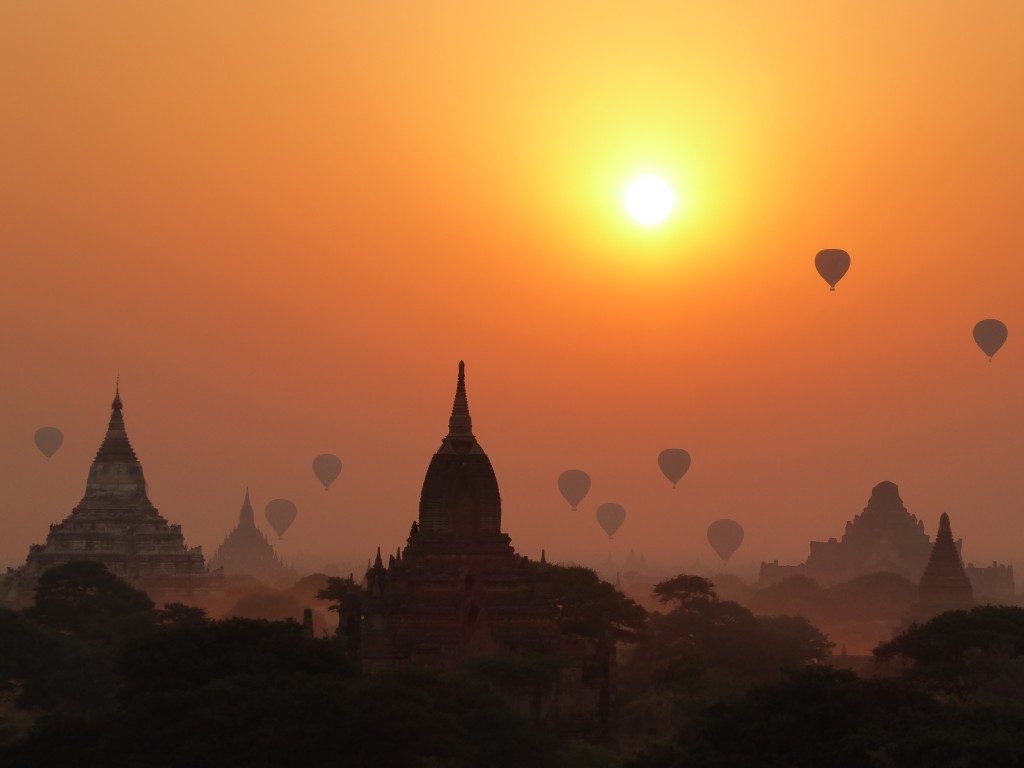 I spent 2 full days in Bagan, my friend Sami did 3 days. For me, 2 days was enough to see the highlights, explore and take in the majestic surroundings, but I can imagine that you can stay there for weeks and still see new things. If you talk to the locals, you’re likely to find out a lot of interesting stuff that you wouldn’t notice just by looking around yourself (like what the different positions of the Buddha mean, or what certain decorations are about) For a novice, all the temples will start to look alike after a little while. But who cares, if there are thousands to see, right? 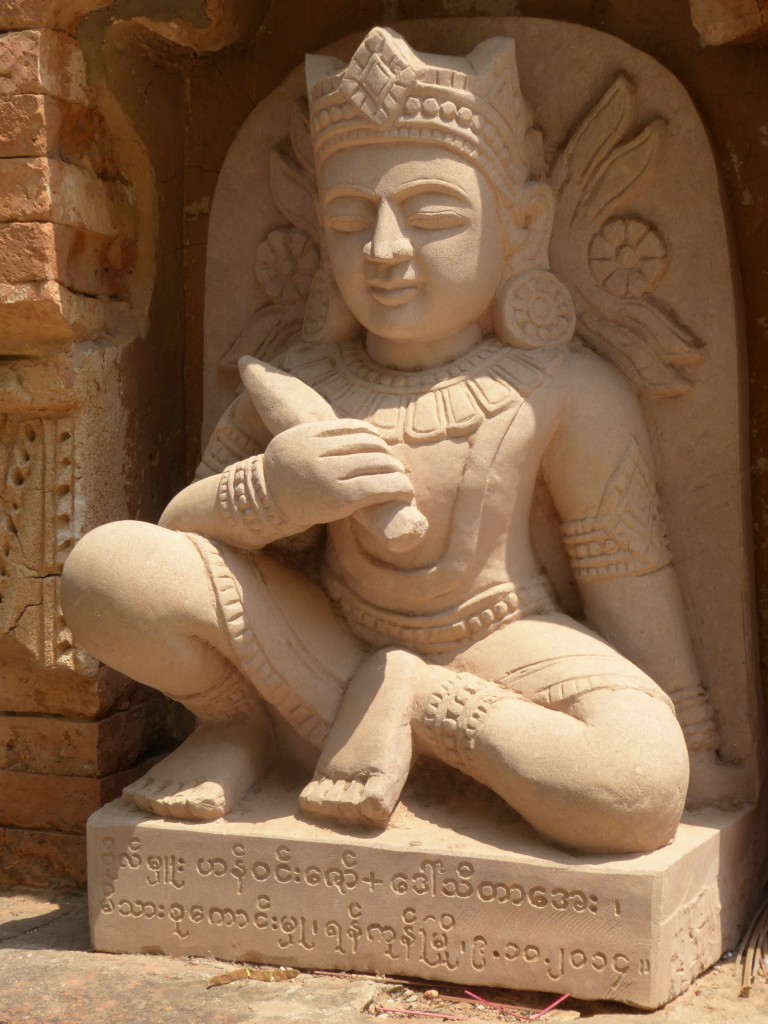