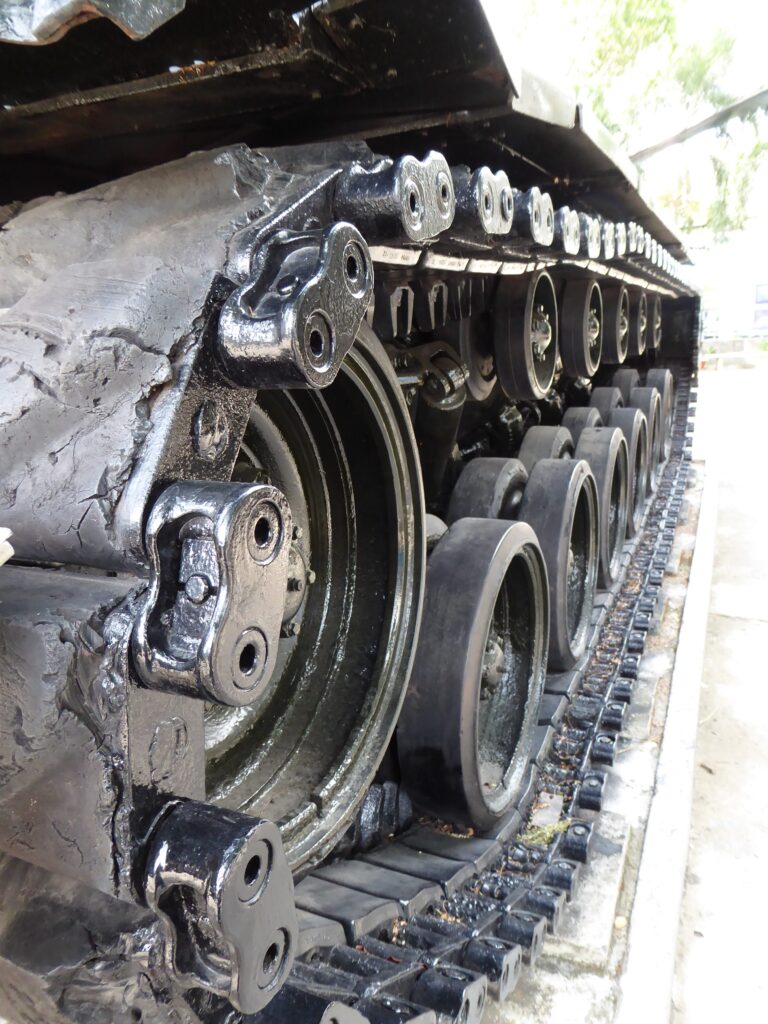 OK, so a lot of Asian countries have a history that isn’t fun to talk about.. In a lot of cases (like Cambodia) the events aren’t well-known in the rest of the world. That’s obviously not the same when it comes to the Vietnam War.

You’re likely to have seen a movie, TV-show or documentary about the things that happened here. It’s however completely different from seeing the results of this war with your own eyes.

But then there is the problem of story-telling: the ‘facts’ about this war seem to change, depending on who does the talking.. But I wonder: is it even possible to be completely objective when you’re telling the public about a horrible period in your countries existence? Or is it logical that the information is partially subjective? Isn’t history always written by the conqueror and never by the loser?

Anyway, despite my doubts about unbiased information, I still wanted to take a look at some of the sites connected to this war.

When you walk through the gates of the museum, you’re first greeted by some very impressive machinery: the courtyard is filled with tanks, fighter-jets, a Chinook helicopter and a lot of other heavy stuff. They are all ‘the real deal’: no replicas, but real machines used in the real war. Very impressive.. Like a flame-thrower that can shoot flames 30 meters away.. You don’t want to imagine that in your crossfire! 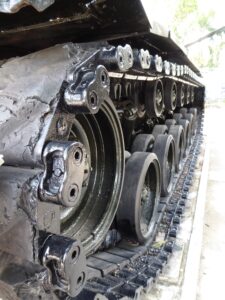 Next to the big toys there are 2 areas you can visit: the main building holding all the photo exhibits, and the ‘special area’ dedicated to the treatment of prisoners of war.

I went to the prisoner-section first.. It was not a happy sight. It shows very graphic pictures and stories about how prisoners were tortured. You could see cages of barbed wire in which people were locked up, and very explicit descriptions of torture methods.. There were replicas of ‘regular jail cells’ with mannequins to show the circumstances.. One of the mannequins looked so lifelike that it scared the crap out of me when I first saw it (through the peeping hole of a cell door) and I had to look 3 more times to truly accept that it was only a doll and not a real person. This section was very disturbing and left me a bit nauseated before I even went to the main exhibit of the museum..

My nausea didn’t really get a lot better during the main exhibit either. They have 3 floors full of pictures.. Pictures taken during the war, after the war, pictures of the results of the usage of agent Orange (a horrible chemical used to wipe out forests, but which also had a horrible effect on people) Pictures of everything.. and nothing is censored or altered: what you see is what you get. So you see bodies torn in half by bombs, people recently executed, homes burnt down with their inhabitants still inside.. All the horrors of war on display..

But somehow, the main focus seems to go to the actions of the Americans, and not those of the Vietcong. I firmly believe that in any war, both parties are responsible and both parties will do horrible things. The Vietnam War was no different.. But the museum choose to put the emphasis on what Americans did (how many they killed, and when, etcetera) and ignore the other party in this conflict. I get it (as the museum is IN Vietnam) but it would maybe have been better if it were less subjective.

That being said, I still appreciated it a lot and I found that it was a serious place trying to show a serious situation. So very much unlike the Cu Chi Tunnels, which have seemed to have turned more into a tourist entertainment center than a historical war site.

Some friends actually advised me to skip the Cu Chi Tunnels, but I wanted to see them anyway..

Cu Chi is a town West of Ho Chi Minh City, and during the war it had a crucial location. The locals used a very intricate tunnel system to live and fight underground, without being detected by American soldiers. This was so effective, that the Americans had to abort their efforts to gain control over this area.

Nowadays, you can visit the Cu Chi Tunnels to see how they did it back then and to actually go in the tunnels. Sounds very interesting, right?

I arrived at the tunnels alone. Usually people go there on a tour, I just drove up, so they didn’t really know what to do with me.. So they gave me a private tour guide. So far, so good! When you buy a ticket, you first enter through a big gift shop. Then you cross the highway through a big underground tunnel to where the actual site it. In one of a dozen bamboo huts you can see a presentation about the tunnels, and see a Vietcong promotion video (which was interesting if not disturbing) Still interesting.. but then it’s time to go see the real thing. You can see a few holes that are entrances to the tunnel, but you can’t go in. You walk further, and pass a group of mannequins posed around a camp site, with the sole purpose of providing a photo opportunity. 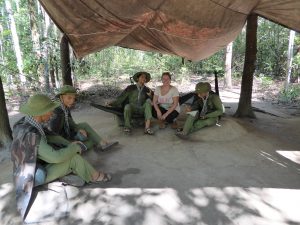 Then you see a display of different booby-traps that were used during the war. Interesting, but basic. You are taken to another set of mannequins, now depicting people working underground to make weapons, and they actually have mechanics in them to show movement.. Again, not very informative but funny for pictures.

You move on, and sometimes hear disturbingly loud bangs in the background. What is that? Well, it’s the shooting range that you are taken to next. You can pay a shitload of money to fire an array of guns, from pistols to machine guns… Apparently, until a few years ago, you could even choose if you wanted to shoot a Vietnamese target or an American target.. What the fuck?

The shooting range has it’s own gift shop (obviously) where you can spend some time browsing the shelves. So far, I’d been to Cu Chi for 1,5 hours and had seen 2 gift shops, a lot of mannequins, a shooting range, and a few holes in the ground that are supposed to be the main attraction. Not very impressed..

After the second gift shop I was finally taken to the tunnels. They’ve been widened so that westerners can actually pass through them (because Vietnamese people are tiny and we are obviously not.. I wonder if any tourist ever got stuck!) The tunnel was impressive to see: even though it’s been enlarged, it is still very small, narrow and dark and I really can not imagine spending months in there without seeing daylight (people mostly came out at night)

So I finally saw the main attraction.. I crawled about 20 meters through the tunnel, got a display of how people used to cook without smoke to attract attention, and then was given a cup of tea (nice!).. And that concluded my tour.. well, they led me past another gift shop on my way to the exit, and then it really was over..

Can’t say that I was impressed. This place holds a lot of history, good and bad, but they’ve managed to turn it into a tourist entertainment center and completely lose the historic significance in the progress. Such a shame!