Despite this Yangon retained its charm as a modern city in a not so modern country. It’s a fine balance between old and new: recently the first KFC was opened, but in the meantime you can hardly find a toilet where you don’t have to squat down. Credit cards are accepted in fancy stores where small roadside stalls don’t even have change for 5000 Kyat (5 US dollars). New 30-story buildings are being put up, while gorgeous colonial buildings are abandoned and left for dead. Everything here is Yin and Yang. 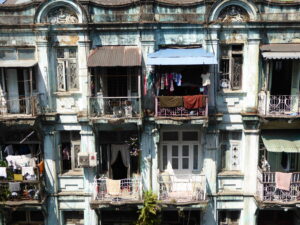 I stayed in Yangon for 2 days. I decided to spend 1 day exploring: just walking around the city, taking it in. First, I stumbled upon the old Secretary. It’s an enormous building that used to house part of the Government, but was abandoned when the military regime decided to move the capital. It now sits there in the middle of the city, overgrown and empty, waiting to be rebuild (which is slowly starting, but will take a long time to finish)

Unfortunately I wasn’t allowed to enter the site and could only take pictures from outside the gate. But still impressive nonetheless. 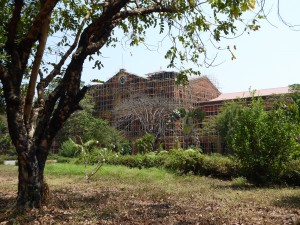 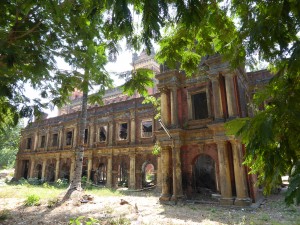 I then walked into Mahabandoola Garden, which is a park across the road from city hall. It’s lovely and serene and a lot of locals go there to chill out and eat their lunch. 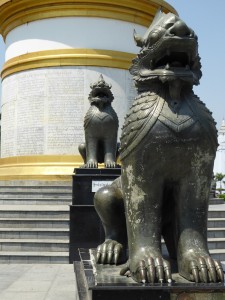 This park is right next to Sule Pagoda, a Buddhist temple in the middle of an intersection. I’d read a few decent things about it, but honestly: don’t go there! It’s a waste of money. First I got scammed out of money by an old lady: you’re not allowed to wear any shoes or socks in a temple, so you take them off at the entrance. The lady set my shoes aside and asked me for 1000,- Kyat, which I believed was the entrance fee to the pagoda. Apparently it wasn’t, because when I came to the top, I had to pay another 4000,- Kyat, otherwise I wasn’t allowed in.. Hmmm, not a good start..

Now I’m going to admit that I am easily bored. After a few temples they all look kinda the same to me and it’s not easy to impress me. But I am however capable of seeing the beauty of a place, even if I have seen many things similar. I just couldn’t see it in Sule Pagoda. It’s small, cramped and just unimpressive. So on to the next part 😉

Most Asian places have a market of some sorts. This is usually where you can get food, trinkets and clothes. Yangon has a market called Bogyoke Aung San Market, and I expected it to be similar to other markets. It is not. It’s actually an upscale market, with nice shops and boutiques, selling pricey jewelry and art as well as clothes and crafts. It’s nice to have a wander around and if you are looking for something in particular, I’d say this is a good place to start.

I headed further north from the market, and finally came to the most iconic building in Yangon: Shwedagon Paya. It’s a massive pagoda in the middle of town, which you can see from far away coming from all directions. It’s relatively expensive to go there: entrance fee is 8000,- Kyat, but you can spend a very long time just taking it all in! There’s a massive golden Stupa in the middle, surrounded by small shrines and temples. 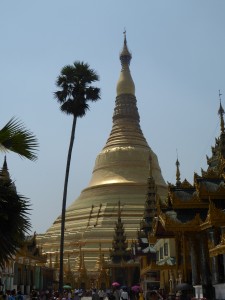 Following Buddhist tradition, once you enter the temple, you first go to the shrine that signifies your day of birth (Mon, Tues, Wed etc) where you provide an offering to the Buddha. This offering is given by pouring water over the Buddha repeatedly. I thought it was a nice way to pay my respects to my surroundings, so I just mimicked what other people around me were doing. It was however a bit difficult to find the correct shrine: Buddhists actually have 8 days in stead of 7, because the day that Buddha was born has been granted a special status. Wednesday morning is the day for Buddha, Wednesday afternoon is anybody else’s birth day. They also have these days in different order than we are used to. 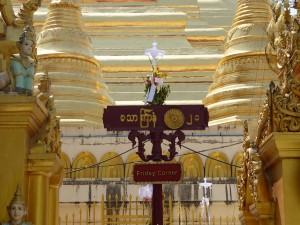 Once you’ve paid homage to the Buddha, you can wander around the complex. There is a lot to see and do, and you can just sit there for hours watching people pass by.

The Eastern exit of the complex leads to Kandawgyi Lake, which has a cool but rickety boardwalk leading you all the way across the lake. It provides a pretty cool sunset view of the pagoda as well!

All these things can easily be crammed into one day. The second day, we decided to see a different side of the city.

We took the circular train, which is literally a train doing a loop around the city. It costs 200,- Kyat, (0,20 US Dollar) and the full loop takes about 3 hours. You can use it to go to certain destinations within the city, but mostly just use it to take in the local atmosphere.

The train is mainly used by locals to go to work, get to the market or transport products from one place to the other. So the train is always jam-packed with baskets of fruit and vegetables, people hopping on to sell food and drinks while on the road, people actually preparing their food on the train so it will be ready by the time they get to the market, etcetera. It’s like watching an ant-farm. If you want to experience true Myanmar culture: take the train. No need to get off. Just ride it full circle and take it all in. It’s simply wonderful! 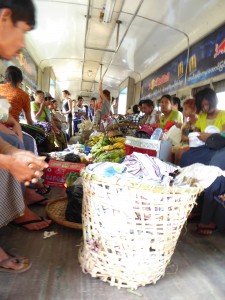 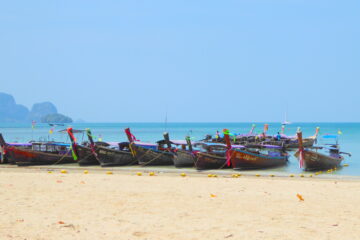